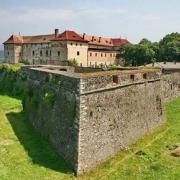 And so we leave the Palanok Castle behind us to follow the road to Uzhhorod. It leads us to a magnificent citadel on a hill – the Uzhhorod Castle, which was first mentioned in the Hungarian chronicles of the IXth century (when the Ugrians were crossing the Carpathian passages). In 10-11th century the castle was under the Hungarian crown. The construction of the stone citadel began in 1248, after another Tatar-Mongol raid. In the beginning of the XIVth century it belongs to Pyotr Petenko, the Hungarian king's opponent and the leader of the anti-emperor rebels). The rebellion was unsuccessful, and two years later, in 1322, the castle was given to the French-Italian family of Drugeths. The Drugeth family were the owners of the castle for 300 years, in which the citadel was immensely fortified so that no one could seize it.

Every castle has secrets and legends of its own. One of them tells us about an unfortunate love. Count Drugeth had a beautiful daughter with long blonde hair. She was dubbed the White Maiden. Polish armies attacked our lands quite often back then. One of the Polish generals disguised himself as a guest and infiltrated the castle to discover its secrets. As soon as she saw him, the young maiden fell deeply in love for she did not know he was an enemy. And thus she saw him among the other army during a siege, but love has clouded her vision, and, despite the gravely danger and possible execution, she wanted to meet him at the gate. The news about his daughter meeting with an enemy has reached the Count. The lovers were caught and punished according to the laws of the time: the Polish general was executed while the young countess was mured alive in the castle walls.

They say the ghost of the White Maiden still haunts the castle, searching for her beloved, only to return to her stone dungeon at the sunrise.

The Uzhhorod Castle is steeped in legends, romance and its historical past; it will definitely steal a way into your heart forever.